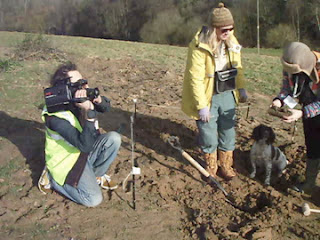 The Activette Time Team visited the Crowhurst sight where the new link road is being built.
For years Nick Austin has argued that fields in Crowhurst mark the original sight of the Battle of 1066, the last successful invasion of Great Britain. Unfortunately Nick doesn't have a PHD so it's been difficult for his to rally the support of other professionals and the money to do a proper excavation of the area.

Recently his theory has gained new importance since it has emerged that the site is under threat from the building of a road linking Bexhill to Ore, a road which is to be supplemented by a big industrial complex and lots of new housing.

The Activettes are against what they call 'The road to nowhere', which is costing the Government roughly eighty TRILLION pounds. WOW! THAT'S ALOT! We foresee that although the road may bring riches to a select few in the short term, it will not deliver the promises of a better quality of life that Councillor Peter 'Chainsaw' Jones and his Circle have pledged.

The Activettes realized that Nick Austin is standing in the way of 'PROGRESS', which is perhaps why his theory has been so discredited. They have decided to support him by embarking on an archeological dig of their own. The Activettes TIME TEAM hoped to find conclusive proof that the beautiful valley at Combe Haven is a site of great Historical Significance, and so halt the work and save it from the wrath of capitalist expansion.

The finds unearthed in the valley during 'BIG DIG':


Ginger Harvey (presenter, 'Big Dig') also engaged with two heavies who asked her to talk to a member of the council through their phone. The council were consequently informed that TIMETEAM were doing a preliminary dig down at the valley in preparation for the arrival of Tony Robinson.